On a recent trip to Chicago I had the chance to visit Dick Costolo, former CEO of FeedBurner and now proud employee of Google. Brad and I took Dick out to a congratulatory dinner. Before we went out Dick gave us a tour of Googleplex Chicago. As we walked around the impressively decked out office (200 inch screen in the presentation room? Wow!) he told us how smoothly the operations ran at Google. “Everything just works” he said, demonstrating the video conferencing system. On top of that, the systems in the Chicago office are exactly the same as the systems in every other office. Learn how to do something in Chicago and you know how to do it in Palo Alto, Boston or Munich. Most of the offices even have the same look and feel. While it may be a bit formulaic, it’s productive. And clearly Google is all about maximizing the productivity of its staff. That . . . as well as the fact that they actually had a working video conferencing system that required no IT staff to actually set up a video feed . . . is pretty impressive.

Here’s a (really fuzzy) picture of Brad and me in the lobby just before leaving: 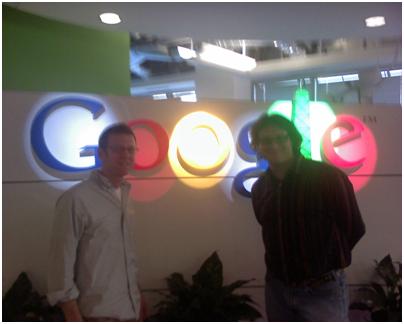