I admit it – I’m not a huge baseball fan.

I used to love baseball. I collected baseball cards, followed the box scores and (in true nerd fashion – especially for that era) kept complicated spreadsheets tracking the stats of my favorite players. The Bill James Baseball Bible was my religion. That was before 1986. That was before, in the time between I left my neighbors house where I was babysitting to be with my dad to enjoy the Sox winning their first World Series since 1918, the world stopped, all reason was thrown out the door and I ended up pacing my room all night cursing the fate that had caused me to be born and raised in Boston. I pretty much gave up on baseball at that point, enjoying the game from a somewhat safer distance. I took a detour back into the fold in September and October of 2004 to finally enjoy the victory that should have long ago been.

Fast-forward a few years and the Rockies are improbably hot and actually pretty fun to watch. I attended my first game this year when Anant invited me to join him at game 3 of the NLCS on Sunday. It was raining and miserable, but the game was great and the Rockies came one step closer to winning the National League. On Monday I was sitting in my office when I got an email from my wife asking “Why don’t you take your dad to the game tonight”. So about 5 minutes and few clicks later I had two tickets to game 4 (and hopes that we’d be seeing the Rockies clinch a World Series berth). [how much StubHub rocks is the subject for another post (they apparently brokered about 4,000-5,000 tickets to the game last night – meaning that about 10% of the people attending got their tickets through them – pretty amazing)] The game rocked and I got to witness first hand one of the most significant sporting events in Colorado history. Plus I got to see it with my dad. Here’s a picture just after the final out. Go Rockies! (unless the Sox get into the Series – an exciting finish to the season can’t wipe out years of membership in the Red Sox Nation). 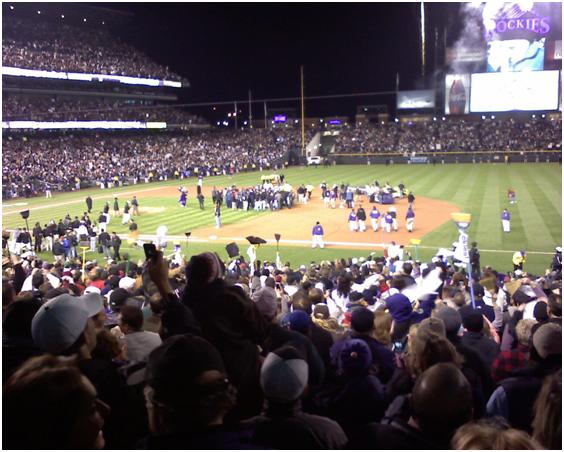