Below is an article I co-authored with Elizabeth MacBride of Times of Entrepreneurship (it was cross posted there on the ToE site yesterday). It’s a good companion piece to the OpEd we wrote for CNBC earlier this week. As many readers know, I’ve been working on a project highlighting entrepreneurs around the county. It’s been amazing to meet so many interesting grassroots entrepreneurs and hear so many compelling stories. I’m happy to be able to start sharing some of those. More details (and on our upcoming book on that subject) soon.

Why is America so divided? The loss of small businesses may be one answer. In research for our upcoming book, we found that small business owners often inhabit the shrinking middle ground of politics in their communities. 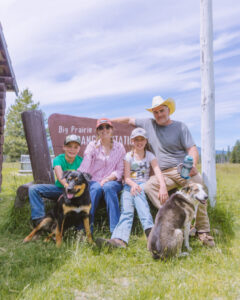 Out in the corral, Mark Cheff rubs some salve on Chinook’s leg above her hoof. Yesterday, two of the mare’s children were standing on either side of her, licking a deep wound caused by a sharp branch sticking out across the trail at just the wrong angle. Cheff thinks she’ll be OK by the end of the tourist season, this fall.

What the future looks like for his small business and the other 25 million — or maybe 22 million, now as the number of small businesses is shrinking rapidly — is less clear. Cheff has been a smokejumper, and owned a construction company. Now, with his wife, Claire, he owns a guide company in the Bob Marshall Wilderness of Montana. Like many of those businesses, the Cheffs, through 406 Wilderness Outfitters, contribute to their community as a source of economic activity, innovation and jobs — and in other surprising ways, as well.

Perhaps we’ll sound hopelessly old-fashioned as we say this. But as we have interviewed dozens of small business owners across the country for our upcoming book, we’ve found people of principal who value hard work; people who are passing along these values to the next generation of young people; people who are safeguarding the futures of their communities.

As a country it seems we may have forgotten the value of these small businesses. America is home to a lot of big companies that dominate the headlines, mindshare and financial markets of our country. But the real story of American business has always been about small. Small businesses are “the lifeblood of the U.S. economy: They create two-thirds of net new jobs and are the driving force behind U.S. innovation and competitiveness,” says the SBA, which tracks business trends for the U.S. government. Small businesses accounted for 44% of all economic activity in the United States and were responsible for $5.9 Trillion in GDP in 2014, the last year for which data are available.

Even before the pandemic, we let our fascination with larger businesses – and the cheaper prices and greater convenience they provide to us – crowd out the evidence of what’s going at the startup and small end of the economy. The trend is that America’s small businesses have been in trouble for a while. Since the end of WWII, the US economy consistently produced net new businesses – more businesses started than closed down. This remained true through any number of recessions. However, this resilience ended with the Great Recession of 2008. The net number of new firms created in the United States was negative – more companies closed than were being started. The result was 117,000 fewer companies in 2014 than there were in 2007. Some 3.4 million jobs don’t exist today because of the decline in entrepreneurship during the Great Recession.

COVID-19 is extending the damage to small businesses much deeper than most people have realized. Even businesses that, by their nature, operate outdoors and with social distancing, such as wilderness companies, have not been immune to the economic effect of COVID-19. A number of the Cheffs’ week long, pre-booked trips have been canceled – devastating blows to a small family business that only runs about a dozen trips a season while “The Bob”, as the Bob Marshall is known to locals, is accessible (for much of the year, the trails are blocked by snow).

The Cheffs intend to make it. But many businesses will not. One recently released working paper by economist Robert Fairlie suggested that the number of businesses in the United States fell by 22% – 3.3 million businesses – between just February 2002 and April 2020. Not surprisingly, this was the largest drop ever recorded. And that was just in the initial months of the pandemic. We’re bracing for a fall surge that could devastate larger swaths of the American small business economy.

Only 20% Of Metro Areas Show Growth

When we lose small businesses, our divisions deepen. In the 30 years leading up to the Great Recession, fully 80% of metro areas experienced an increase in the number of firms annually. This trend was completely reversed by the Great Recession, after which only 20% of metro areas have seen an increasing number of companies created. New business formation has been depressed in most of the country.

Economists have been puzzling about the reasons for the decline in entrepreneurship. The answer is pretty simple. It’s always been hard to be a small business owner and lately it’s become even harder. Here’s one tiny example: health insurance. It’s unlikely the Cheffs would be in business without the help of the health insurance provided by Claire’s second job – she works as a teacher in the nearby Ronan public schools, a job that maps up well to her “off-season” of guiding. Good insurance is critical, because Mark Cheff has rheumatoid arthritis. In his smoke jumping career, he carried 120-pound packs for as much as 25 miles to fight the increasing number and severity of fires that occur in our nation’s wilderness. A hospital stay this winter didn’t keep him from playing a practical joke on the people who came to see him: Pretending to be brain damaged for the first few minutes of the visit.

What motivates a small business owner to keep going, working another job, or dealing with physical hardship, or the stress of making a payroll — during a pandemic? It’s true that many small business owners want to build wealth. A number succeed, which is good for the economy. But many more start businesses because of a sense of purpose or calling, because they want to pursue a passion or to create freedom and flexibility for themselves and their families. People faced with hostile work environments, especially women business owners and people of color, and older people, start companies to create their own opportunities where they can dictate their own work.

Overwhelmingly, as we interview small business owners across the country, we find they have stuck with it against the tough backdrop of the last few decades because they love what they do. COVID-19 may be the final blow for many more of them.

When we lose a small business, we lose that passion in action, which transmits values. It’s no accident that the Forest Rangers figuring out how to lobby for the trail budget they need to keep the Bob Marshall safe look to small guide companies for help. Or that the Blackfeet Tribe, as it fought a decades-long battle to void a mineral rights contract on its land, built a coalition of local small businesses to help. There is a big business in the area — Xanterra, which has the Glacier Park concession contract. It’s owned by billionaire Philip Frederick Anschutz, who also owns oil, railroads, telecommunications and entertainment companies. Safe to say nobody around here has his phone number.

Claire Cheff calls their guide business a calling; it was founded almost 100 years ago by Mark Cheff’s grandparents, a Montana cowboy and a Salish outdoorswoman. Claire Cheff married into the family and loves to watch families reconnect as the mobile phone signals disappear a mile or two up the trail. People panic briefly, and then they start to talk. The trips are an adventurous vacation, but with the side effects of teaching respect for the environment, the importance of land preservation and plain old-fashioned humility. Everyone gets equally sore and dirty on a 10-hour ride in.

Entrepreneurs Do More Than Supply Jobs

Our responses to the pandemic so far have focused on jobs, and small businesses’ role as employers. The Federal Payroll Protection Program (PPP) enabled some small businesses to keep their employees, at least for a time. But it had its limitations – and those limitations hit small businesses especially hard. The next iteration of federal aid will need to have a more powerful focus on the smallest companies in our economy if we’re to have any chance of saving them. These companies need to see an extension of the PPP program – particularly for those who have been hardest hit; a broader set of expenses against which aid money can be spent and still be forgiven; and, importantly, the expenses covered by PPP need to be tax deductible so small businesses don’t face an insurmountable tax burden at the end of the year. A streamlined and clear borrowing and forgiveness process are also critical pieces that should be addressed in new legislation.

Maybe it will spur Congress, state legislatures or private philanthropies to action if we recognize the intangibles slipping away as millions of businesses close. Like many small business owners, the Cheffs exist in a web of other small businesses and are de facto workforce training, sometimes for young men who need nothing so much as a summerlong dose of hard physical work.

And while we think of dynamism and innovation as qualities that belong to mostly or solely high-tech companies – that would be a mistake. The Cheffs and other guides are on the cutting edge of two trends in American outdoor life: adventure sports and lightweight rafting. Inventions go nowhere without businesses to bring them to market. Very often, it’s the small businesses inside and outside of the tech world that do that heavy lifting.

One of the most important roles small businesses play is that they occupy the nuanced, complicated middle ground. In our research, we’ve seen small business owners taking unexpected stands that are outside the norms — or at least, the stereotypes of what the norms are supposed to be. Progressive on one issue, they are conservative on another. The connection isn’t always obvious, until you recognize that their interest lies in the long-term health of their communities.

On any given night on a recent weeklong trip, small business owners gathered around this Western campfire. The conversations between the Cheffs and the Albers, who own a sawyer company called Miller Creek Reforestation, include talk about the loggers who make a living off timber but who also supported the latest wilderness expansion. Everyone celebrates the victory of the Blackfeet Tribe at Badger Two Medicine. There’s also concern for the Montanans being displaced by less expensive immigrant labor — as well as for the labor standards the immigrants work under. COVID is a concern. So is the health of the business community.

There’s worry about the Forest Service budget, but also an idea to apply for a grant to supplement it. It’s not knee-jerk criticism of “politicians.” It’s a recognition that decisions aren’t simple, and that nobody “wins” in a functioning community — the victory is in continuing to coexist.

When we lose small businesses, we take a loss on three incredibly important pieces of America. We lose jobs and on-the-job training. We lose dynamism and innovation. We lose their owners’ voices, as people of economic stature who have a long-term interest in their communities, and ours.

If our country is to heal, it needs small business owners back and engaged, full-strength. They are the backbone of America. We need to save them.

Adapted from The New Builders: Why Women, People of Color and People over 40 Are America’s Economic Future (tentative title), upcoming by Seth Levine and Elizabeth MacBride