As I listened to Kamala Harris and Joe Biden give their speeches from Wilmington on Saturday, I was struck by the contrast they offered to the rhetoric we’ve heard coming out of the White House for the past 4 years. Perhaps I had forgotten what ‘normal’ actually was. Both Biden and Harris spoke to the entirety of America – those that voted for them and those that didn’t. They spoke of character, honesty, science, and a belief that our strength comes from collective action, not from divisiveness. I woke up Sunday morning, as I imagine many of you did, with the feeling that a weight had been lifted from my shoulders. That, while America remains surprisingly divided, we’re back on the right track. I was struck by the outpouring of pure emotion we saw, not just from around America but from around the world. It will clearly take us years to heal from the divisiveness, hatred, and animosity that our soon-to-be former president stoked and thrived on. And without question, there are voices around the country who feel marginalized and that they have been left out. We need to acknowledge that and understand why 70 million people believed that the right conduit for their voice was a racist, bigoted, selfish, lying autocrat.

I’ve been thinking a lot about the legacy Trump leaves behind – especially his legacy of racism and hatred – and wanted to share a story to put some of that thinking into context.

Trump took bigotry and hatred, that had clearly been simmering just below the surface in this country for centuries, and brought to a boil. He made it acceptable and seemingly righteous to be racist, sexist, homophobic, and generally intolerant (if not malicious) towards anyone that is somehow “different.” And while I think it’s a mistake to paint all Trump voters with a broad brush, certainly a vote for Trump was at least a statement that these things weren’t a deal-breaker. It’s ok to vote for a racist, as long as you get X (whatever that thing is that you think is more important than character and integrity).

Last week, our family dealt with a situation that was a reminder just how harmful this embracing of racism and intolerance has been to our society. 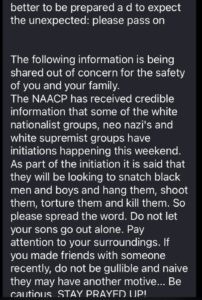 Late Thursday night, around 11 pm, we received a call from our daughter. She had been alerted by a well-intentioned friend that the NAACP was circulating a warning that white supremacist groups were plotting to kidnap black men and boys with the intent to torture and kill them. She was worried about her brother, who is black, as well as her friends at school who are black and brown. I can’t tell you how upsetting it is as a parent to know your child is up late at night worried about themselves and their family because they are targets simply because of the color of their skin.

As parents of two black children, we’ve learned a lot about the state of race in our country in a way that our privileged, white upbringing (even in liberal households) didn’t allow us to understand. When a family of black children refers to “the talk,” they’re not talking about the birds and the bees. They mean the talk that black families have, to tell their children to watch out. To be careful about how they interact with people in authority. To explain to them that they will likely be targeted (pulled over by police, followed, etc) because of the color of their skin, but that they need to be careful in diffusing those situations, lest they be in harm’s way (like somehow this racism is their fault). We’ve already seen our kids be followed and targeted because of the color of their skin. In our family, we had “the talk” when our son was just 8 and our daughter was 11 (tbc, the talk is an ongoing conversation, not a one-time thing; over and over we’re forced to confront a racist society and racist acts and put them in context for our family).

And I can say unequivocally that overt racism has increased since Trump was elected. He didn’t invent racism, but he made it great again (to use his marketing term). We’ve experienced it as a family. Our kids have experienced it. So many others, too. I was recently talking to a black friend, a woman who has lived in Georgia all her life. She said the same thing. In 45 years she had never been called the n-word. The week after Trump was elected she was. And then repeatedly over the course of the last 4 years. Trump awakened something that was just under the surface of our society. And it’s not going to go away just because he is no longer president.

The supposed NAACP alert that our daughter sent to us turned out to be a hoax. It felt off when we saw it due to the language used, and when we looked online it turned out to be false. The idea that this warning was valid was completely plausible, given the social climate we’ve been living in and the hype we saw in the media over the past several weeks about potential election-related violence. And no doubt there were people out looking to do harm to those that they felt had caused their guy to lose the White House. While many people reading this are likely a few steps removed from the realities of what this really means to many people in our society, I wanted to share this story to provide a bit of direct and real world context. We were up that night thinking about whether our kids are safe, only because of the color of their skin, and sad and disheartened that they are afraid. Black parents (and other parents of black and brown children) around the country have to think about this all the time. That fact shouldn’t be news for anyone. Being white (and male), I can only scratch the surface of understanding what it really feels like to be a minority in the U.S.

I’m genuinely hopeful and energized about the Biden/Harris administration’s work over the coming years. But we cannot leave all of the work to be done up to the government. It’s imperative that we all work within our own communities (professional, school, religious, and social) to repair the injury that’s been done – an injury that is deep and significant. We’re compelled to move forward now but we’re doing it with a keener understanding of the raw suffering of our fellow Americans. Perhaps that understanding will help us to work harder for justice and be more empathetic towards those of us who aren’t white males and have suffered because of it.