Categories
Board of Directors

For frequent readers of this blog, you know I’ve written a lot about startup boards including the importance of diversity and being deliberate about how many investors you have on your board (hint: likely too many).

Last month I joined Bolster and compensation consulting firm J.Thelander for a conversation on building and compensating boards in the most effective way possible. This is an important topic, and I wanted to share and emphasize a few insights from the conversation. If you’re interested in watching the full session you can do that here. Much of the data shared by Bolster can also be found in their Board Benchmark report that I wrote about earlier this year.

The role of the independent director is an important (and often under-utilized) strategy for CEOs. 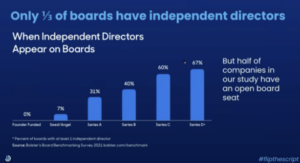 Investors can (and sometimes should) make room for independent board directors. 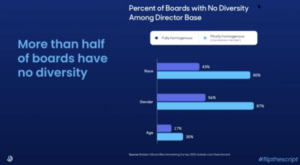 Independent directors are a leading source of diversity on boards.

Unsurprisingly, private company directors are almost exclusively being compensated with equity so the details of those equity grants are important.

Grants vary by stage –  or rather total amount raised as stages are becoming less relevant when there are these mega Seed/Series A rounds.

I wrote a series of posts here on how to manage your board and board meetings if you’re interested in digging deeper into that subject.

I hope the insights above help company leaders be more thoughtful about their board. Used properly they can be massively impactful to a company’s success.

Categories
Board of Directors