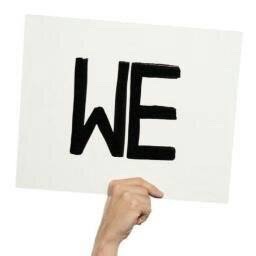 This is not a post about politics, but let me start with something I’ve noticed over the past few weeks in the presidential race, which is Hillary Clinton’s shift from using “I” to using “We” in her speaches. Bernie Sanders has been using plural language for pretty much the entirety of his campaign and it’s been an effective tool for him to make audiences feel that they’re in this with him. On the republican side, Ted Cruz uses this language very effectively (interesting Trump seems to vacillate – sometimes in the same sentence – between the use of I and We).
It’s a small shift in language but it has a powerful effect – at the same time enrolling the audience and making the speaker seem more humble.

Years ago at Foundry we realized that we were often using I instead of We when talking about our firm, our investments and our thoughts on the market. It was subtle but working against what we were trying to build as a firm and also sending the (wrong) message that whomever was speaking at the time was somehow separate (perhaps perceived as above) the partnership. It took us a while to notice this but eventually we did and it precipitated a great conversation at one of our quarterly offsites. We immediately changed our language and to this day talk about the shift from I to We and how powerful it has been for us.

Worth checking your own use of pronouns to see how you’re describing your projects, your team and your company.