I’ve published a number of posts over the past few weeks about some of the challenges of the existing PPP loans and in particular, about my concerns that the loans aren’t getting to as many of the smaller businesses that need them. In this CNBC op-ed article, Elizabeth McBride and I pointed out how the face of entrepreneurship in the United States is changing. Specifically, the number of women-owned businesses has increased 31 times between 1972 and 2018 (in 1972, women-owned businesses accounted for just 4.6% of all firms; in 2018 that figure was 40%), according to the Kauffman Foundation. But the aid programs are largely failing to address the needs of these key entrepreneurial communities and the PPP loans are not getting broadly distributed across these demographics. The pressure on Main Street entrepreneurs is being compounded by the current economic crisis in ways that we haven’t even begun to wrap our heads around. Businesses started by women and minorities are more likely to have been impacted by the crisis and we fear will be the last to recover from it. According to the Center for Responsible Lending, a large majority of Black, Latino and other minority-owned businesses stand close to no chance of receiving a PPP loan through an SBA-approved bank or credit union. With loan sizes pegged to payroll, women and minority-owned businesses – which on average employ fewer people and as a result have smaller payrolls – are being de-prioritized by the banks that are the gatekeepers of the program. Compounding this problem, women and minority-owned businesses are also more likely to use contract or 1099 labor, which the PPP loan calculations exclude for purposes of calculating eligible loan size. And more fundamentally, these entrepreneurs are less likely to bank with an SBA approved lender. Even when they do bank with an SBA lender, there is evidence that these lenders are favoring their larger “small business” clients (for example, the average loan size in the initial PPP program was over $200k, representing businesses with payroll of around $1M / year).

I recently published some recommendations that I sent to several members of congress to consider (some of these made it into the Federal Stimulus Package passed this last week). Included in it were some ideas that were specific to this point including the potential for a specific rural allocation of funds as well as including CDFIs in the program. I was happy to see that Congress specified $60 billion targeted at smaller banks (with the idea that these banks serve more small businesses). I was also happy to see CDFIs explicitly included in this 2nd traunch of the PPP program (these institutions are key avenues to funding these lesser served businesses). However, none of this is really enough, given the importance and relative size of women and minority-owned businesses in our entrepreneurial ecosystem. I plan to continue to work on this but I wanted to flag it to readers as an area of federal support that is significantly lagging. Unfortunately what hasn’t been addressed is the expansion of the program beyond “paycheck” and beyond the initial 8 week period of coverage that has initially been addressed. In the case of most main street and small businesses, calculations of payroll are far too small to provide the stabilization that these businesses need (many small businesses have expenses such as rent and utilities that are significant relative to their payroll costs). Further, by stipulating that funds need to be spend on payroll to qualify for forgiveness and by covering only an 8-week period, the current program effectively acts as a Federal unemployment insurance, rather than a business stabilization program. Companies need more flexibility in how they spend aid dollars to balance what’s in the best long term interest of their business (i.e., survival) and the best interests of their employees (many of whom will be out of work well past the 8 week period anticipated by Congress and some of whom are better off individually taking enhanced unemployment benefits).

Related to all of this, we’re putting on another webinar through the Financial Assistance Network (see the Network announcement here). We’re partnering with Good Business Colorado, The Bell Policy Center, Best for Colorado, as well as a number of other organizations and are especially targeting women and minority-owned businesses. You can register for the webinar here. I’d appreciate you sharing this with your networks to get the word out. The FAN network has already helped over 150 businesses but we have plenty more capacity and I’d like to see this number grow significantly, especially in light of the data that’s coming out showing just how many businesses haven’t been able to unlock federal aid and the number of companies struggling with key decisions that may literally effect their survival. Let’s give these businesses and the entrepreneurs behind them as much support as we can. 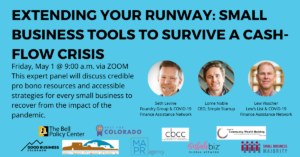